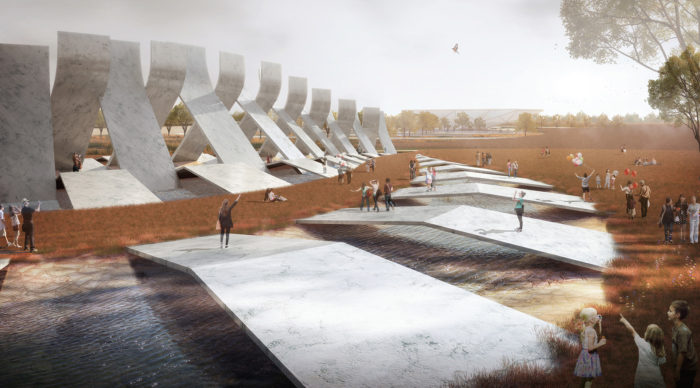 At this memorial, people walk, sit, play, picnic and start a variety of activities. This memorial is completed by connecting nature, landscapes, sculptures and people.
We designed following a poem “Path” which we made as below.
There was a path a flying little robin found.
Looking closer, the path was a pile of rugged ice rocks.
Even when the limit was reached,
With passion, the ice continued to spread
North and south, east and west.
There was no way out other than making cracks itself.
It needed more ice as if to cover its wound.
Before the wound healed,
the ice, which was pressured from the side at once collided
and formed an immense scar of ice.
The little robin looking for a place to rest for a while
happened to find it from the sky.
After that winter, when the robin came by,
the ice had been melted and rounded, turning into soil in places.
When the little robin grew up and came back again
for the first time in a long time,
there was a gentle path,
plants grew, and the robin’s favorite seeds had fallen.
The robin rested on the mistletoe that grown up on the side road
and made it its dwelling place forever.
There is a path, not a road at the beginning.
Because someone has fought, hurt but worked hard,
and learned after failures, we can walk on the path.
We can make a way.
Imagine there's not countries